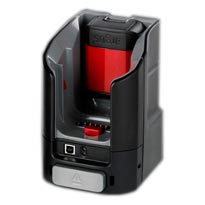 The Argus® Mi-TIC Docking Station can be used as a desktop or in-truck charger unit. The Argus Mi-TIC comes with a Docking Station as standard but the advantages of having multiple charging stations is endless. The station can charge the camera battery and a spare battery simultaneously. Separate LED indicators provide feedback to the user on the current charge condition.

The Mi-TIC can be inserted in the Docking station(ARG_MI_CS)  which will then lock it in to make it secure, it can then be quickly removed using the front mounted ejection button.

A spare battery can also be locked into the slot behind the Mi-TIC , using the same locking system.

The Mi-TIC Docking Station features 2 USB ports,one at the front and one at the rear to allow a PC to be conveniently connectec. This allows captured images and videos to be downloaded as well as allowing the USer to configure the Mi-TIC itself.

Up to six docking stations can also be daisy-chained together via front mounted connectors accessible via a removable cover. These can also be hard wired into a truck.

A dual purpose mounting bracket allows the docking station to be mounter both horizontally and vertically.

The unit is suitable for use on 12V or 24V vehicle systems.