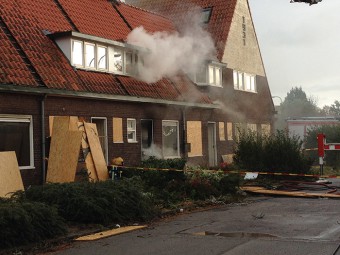 AEP in cooperation with IFV

The changes in the design of buildings and materials used herein have structurally changed the nature of house fires. Research shows that in modern homes flashovers are reached eight times be faster than homes built 50 years ago.

From Monday, November 20, to Thursday, November 23, 2014, the IFV collaborated with the Dutch Fire Department and conducted several unique fire experiments in Zutphen. Seven terraced houses were furnished with modern furniture and became the stage of an experiment being simulated in a realistic way. Within these houses, several measuring tools were mounted, so the development of the fire was fully monitored. Among these measuring tools was one of our thermal imagers; The Argus 4. Through direct streaming it became possible for the IFV to visually follow the development of the fire. Besides capturing impressively sharp images, the Argus 4 has also shown its resistance to extreme temperature (+/- 800 ⁰C = 1470 ⁰F ).